November 10, 2014 Comments Off on Twenty One Pilots Make a Night to Remember in Austin Concert Reviews, Photos, Uncategorized  Like

Twenty One Pilots Make a Night to Remember in Austin 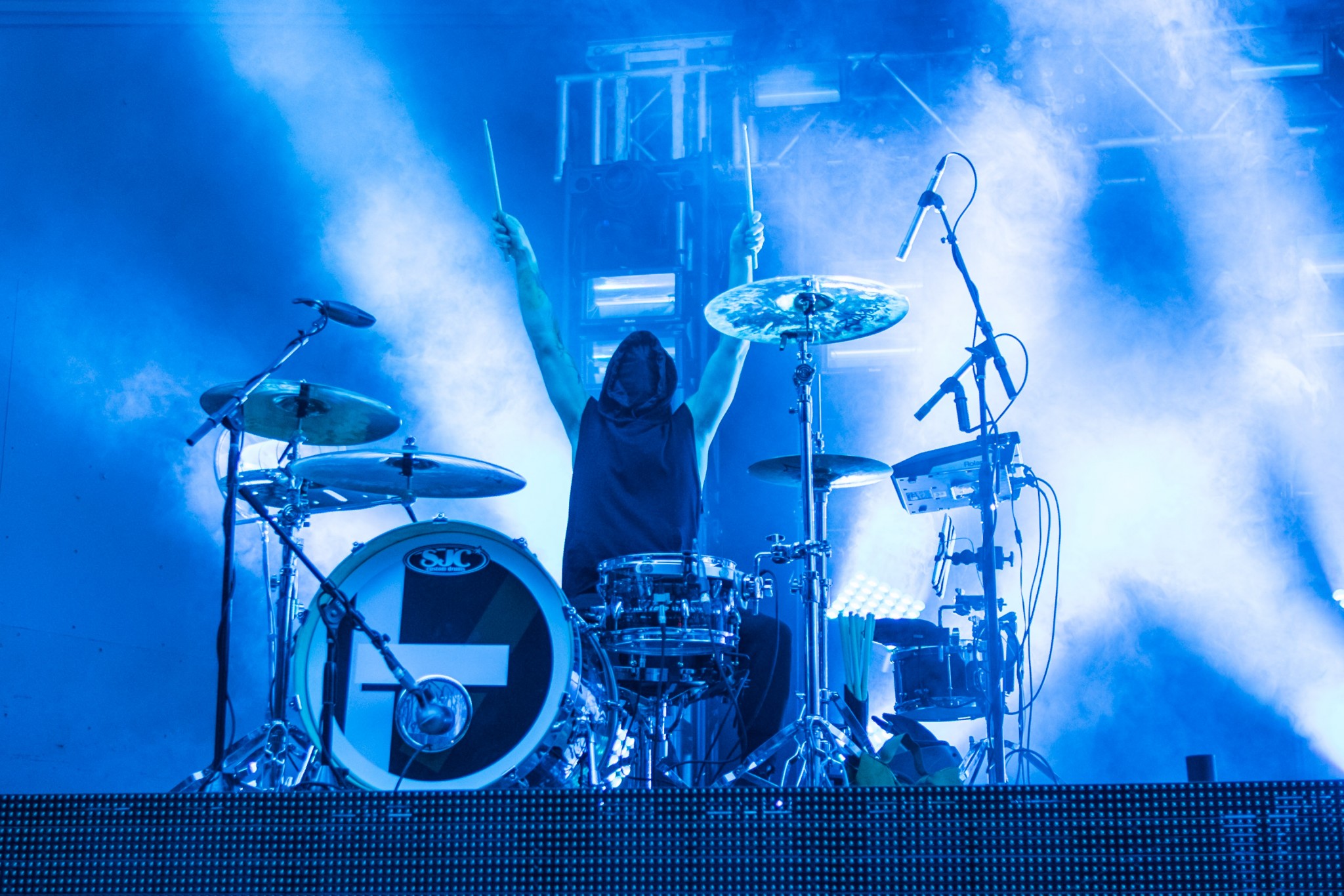 This article was originally featured by Longhorn Life.

STUBB’S, 9:10 p.m. The lights go off. The music cuts out. Ear-piercing screams explode from all around. A voice-over plays, explaining that his name is Nigel and he will be the host for the evening. Soon, Nigel introduces the act that everyone has been waiting hours to see, Twenty One Pilots.

Two men dressed in black and wearing ski masks take the stage and erupt into a beautiful chaos of music, smashing drums and symbols, slamming black and white piano keys with a purpose, setting the tone for the evening.

Twenty One Pilots ended their second U.S. headlining tour in Texas on the weekend of Oct. 18. They stopped in Austin at Stubb’s for their second to last night of the tour.

The two-piece band consists of Tyler Joseph, vocalist and pianist, and drummer Joshua Dun. The genre of their music is listed as “Schizoid Pop” on the band’s Facebook page. After taking one listen to their full-length album the classification is justified. Their sound can range from sing-a-long melodies to rap and from happy-go-lucky piano chords to alien-like synthesizers, and that’s just within one song.

The show was somewhat of a farewell not only symbolizing the end of the tour, but the end of their album “Vessel,” which was released in January of 2013. After almost two years of touring the world in support of the same release, the band plans to close this chapter and work on new music.

There was a bittersweet undertone to the synergistic energy rebounding through the venue.  Bitter to say goodbye to the album, but sweet to be playing for the fans that made the music what it is. Joseph and Dun knew they couldn’t disappoint.

In the middle of an old, angst-driven ballad, Joseph said, “If you haven’t figured it out already, we’re going to give you everything we have tonight. I promise.”

And that promise was upheld.

Die-hard fans that showed up at the venue beginning at 8:30 a.m. reciprocated the passion and sweat the band put into each song. Many fans showed off their band loyalty by showing off their tattoos in honor of lyrics.

The band played songs off of “Vessel,” mixed with a few heart-felt oldies and several partial covers, including “Bugatti” (Ace Hood), “Drunk in Love” (Beyoncé), “Can’t Help Falling in Love” (Elvis Presley) and later in the show a remix of “Summertime Sadness” (Lana del Rey).

The two ditched their ski masks, icons of the band, for several wardrobe changes, including matching skeleton zip-up jackets. Joseph donned a floral kimono (a festive touch, he noted, for his mother during her song “House of Gold”), and Dun took his shirt off before returning to the ski masks again.

For me, seeing Twenty One Pilots perform at Stubb’s came full circle. I saw the duo for the first time in the parking lot of Waterloo Records at SXSW 2013 with 400 people, probably only half of whom actually had a clue who the band was.

I was in awe seeing a guy on drums and a guy on piano give a rowdy, high-energy performance. Joseph dominated the stage, running around, jumping off the piano and even scaling and jumping off the stage scaffolding. Just watching them made my ankles scream.

They’ve kept most of these habits up, but brought them to higher extremes and bigger stages. Dun smashed his drums from atop an LED platform, while Joseph continued his antics, taking a super-human running jump off of his upright piano.

Although Stubb’s hanging speaker scaffolding looked like prime climbing and jumping opportunities, Joseph, to my surprise, did not ascend them. Instead he disappeared at one point in the set, and to the crowd’s amazement, magically reappeared by the sound booth, on top of scaffolding set up for him.

The band had yet more special surprises for the audience. Dun performed a drum solo on a kit that was assembled on a platform held up by screaming fans. The encore was another drum spectacle: both Joseph and Dun clambered above the crowd with their

bodies and drums being supported solely by their fans.

The crowd’s ecstatic energy could be felt in the air, and was only heightened by smoke cannons firing at timed intervals, making for a display of dedicated showmanship and dedication from the duo.

If one thing is for sure– whatever comes next from Twenty One Pilots will have as much spirit and passion as they displayed that night at Stubb’s, because as long as they have fans buying their music and selling out their shows, they will continue to give them their all in return.