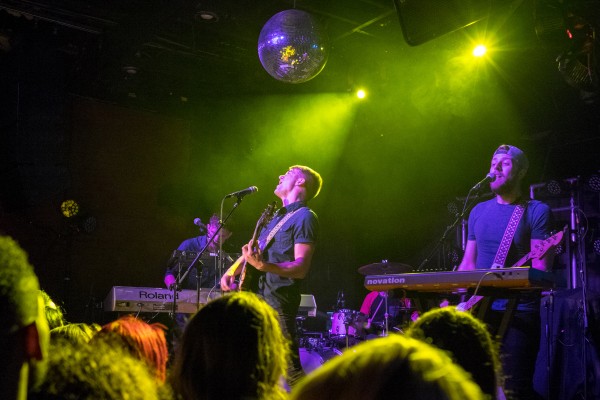 I arrive at The Parish on a warm Tuesday evening. It’s always weird to see 6th St. not overrun with massive crowds of partygoers, but even with the street empty, there is already a line at the venue of eager fans waiting for the show.

I meet their manager in the back alley and we go into the venue through the back door. Vinyl Theatre is hanging out in a small lounge area with food and drinks. The manager introduces me to the guys and singer Keegan Calmes offers me a water bottle before we sit down and start talking. The guys mention how much they love Austin, as it’s their second time here. The first time was with twenty one pilots, but this time around they’re on tour with Magic Man.

I dive into the interview with the four-piece band. Hailing from Milwaukee, WI, singer and guitarist Keegan Calmes, keyboardist Chris Senner, bassist Josh Pothier and drummer Nick Cesarz knew each other growing up and many of them played instruments from a young age, but they officially formed the band in 2012. 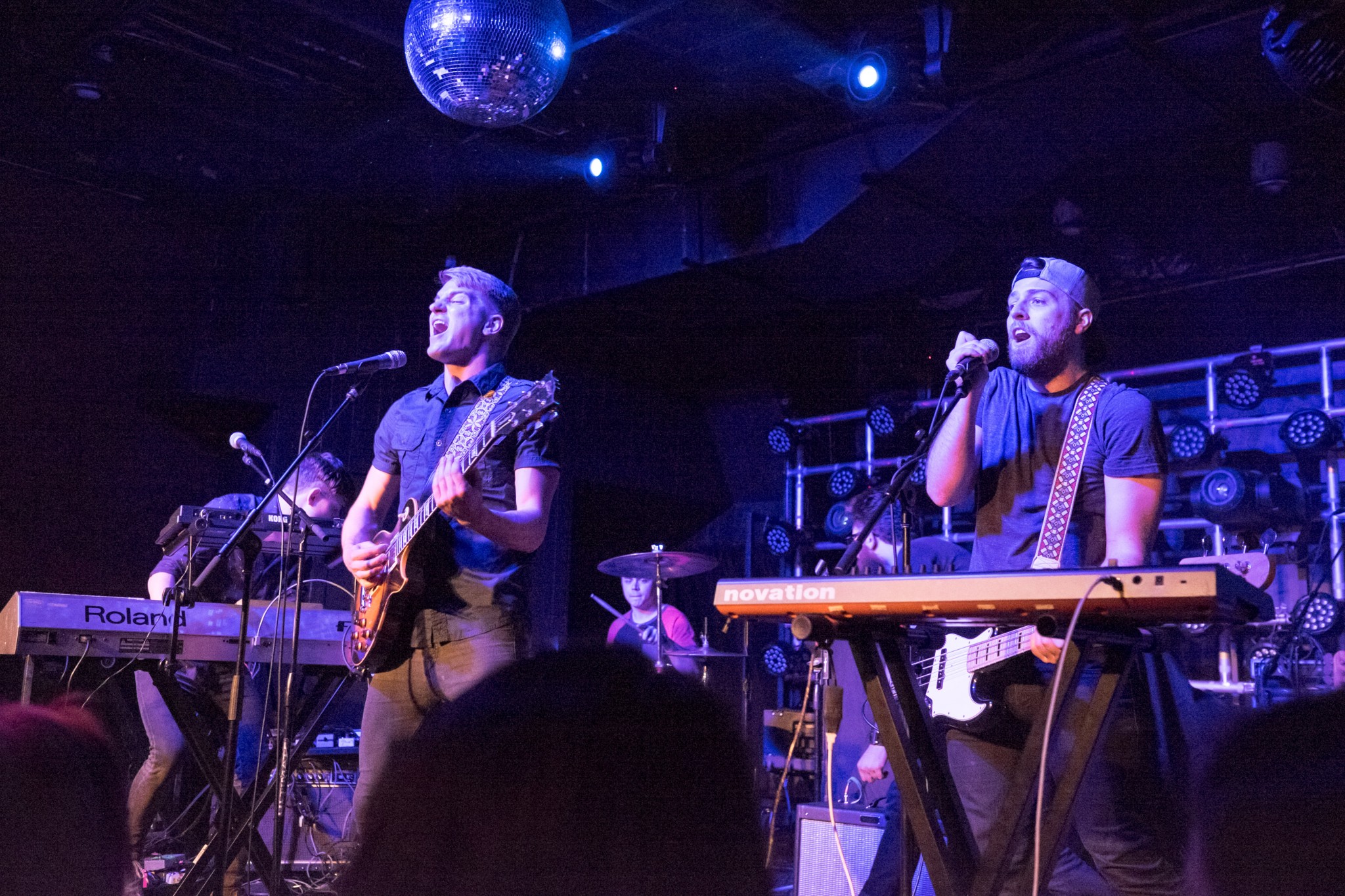 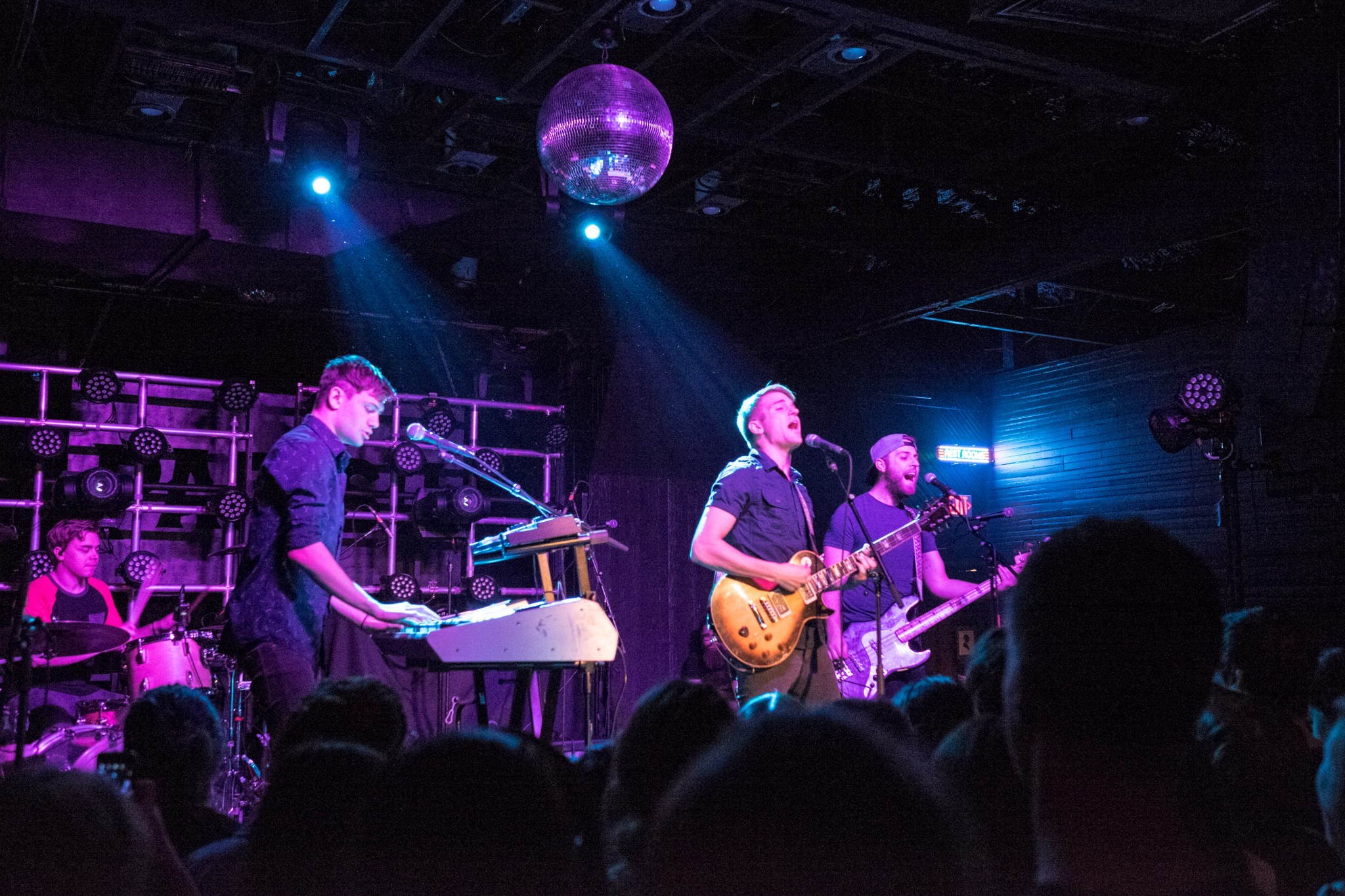 They explain how they first found exposure on the Internet. Says Cesarz, he had the idea to release singles on SoundCloud, a music-streaming platform, over a period of weeks, allowing for each song to trend from continuous plays. “Almost unexpectedly we, like, cracked the algorithm,” says Calmes. Not only did the SoundCloud tactic cater to Vinyl Theatre’s online fan base, but it allowed them to reach new listeners from their songs trending on the site.

Around the same time, Fueled By Ramen expressed interest in the band and flew out to see Vinyl Theatre play in Cesarz’s parent’s basement. “We were just scared out of our minds,” says Pothier. “It’s the place we practiced for years and then these hot-shot record label people were just sitting there in front of our practice space just listening to us.” With a lot riding on this one performance, they say they could see their fate in front of them. “We kind of knew after that meeting that this could be it,” says Calmes. “It was kind of exciting and terrifying at the same time.” It’s a huge milestone for anyone to be signed to a label with artists like FUN. and Paramore. But Vinyl Theatre didn’t get there over night.

Their initial set up was unconventional, to say the least. With Senner and Cesarz going to college in Wisconsin and Calmes in Colorado, the three wrote over Skype and sent each other song files that each would contribute to separately. “I’d have no say in what happens with the drums,” says Calmes. “It would just come back with a full drum track done, which was cool ‘cause it was always a surprise.” Sometimes that was it, and sometimes they went back to the drawing board. They made the long distance work but knew it couldn’t stay that way if the band got serious. In the back of their minds they were prepared to pick up and leave everything to dedicate their pursuits to the music. “Eventually, the passion between the three of us became so strong for the songs that we started to believe in them and believe in each other that we’d all quit,” says Calmes. The guys all nod in agreement, each reflecting on their personal experience and the unspoken pact that Calmes says bonded them. And the pact ultimately led to where they are today.

With the addition of Pothier, and Calmes moving back to Milwaukee, the writing process also became more seamless. “We started to write with that whole one-minded feeling of, you know, everybody spellchecks for everybody else, and we give each other great ideas,” says Calmes. After signing with Fueled By Ramen in 2014, the band returned to the studio to record Electrogram, their first full-length album. Coming in with more experience, the band was able to give more attention to the songs, creating what they noted as a more mature and intricate sound.

The four each bring different musical tastes and influences to the table from The Killers to Blink-182 to electronic dance music. They all learn from each other and are able to craft their electronic pop-punk sound. Their sound defies genres, fitting more along the lines of twenty one pilots, a new wave of punk and electronic infused rock. “Our feeling of creating something original in a world full of noise is really tough,” says Calmes. “You just kind of find solace in the fact that whatever you do make, you share it with a unique group of people.”

Electrogram is representative of the band ­– it tells the story of their bond and their passion for music, something they hope to share with fans. “We want people to get excited about life and their passion, cause so many people will chase after something half-heartedly, and… we always feel like you should go all in,” says Calmes. Clames says the band would not have felt true to themselves if they didn’t stop everything else to make Vinyl Theatre their focus. 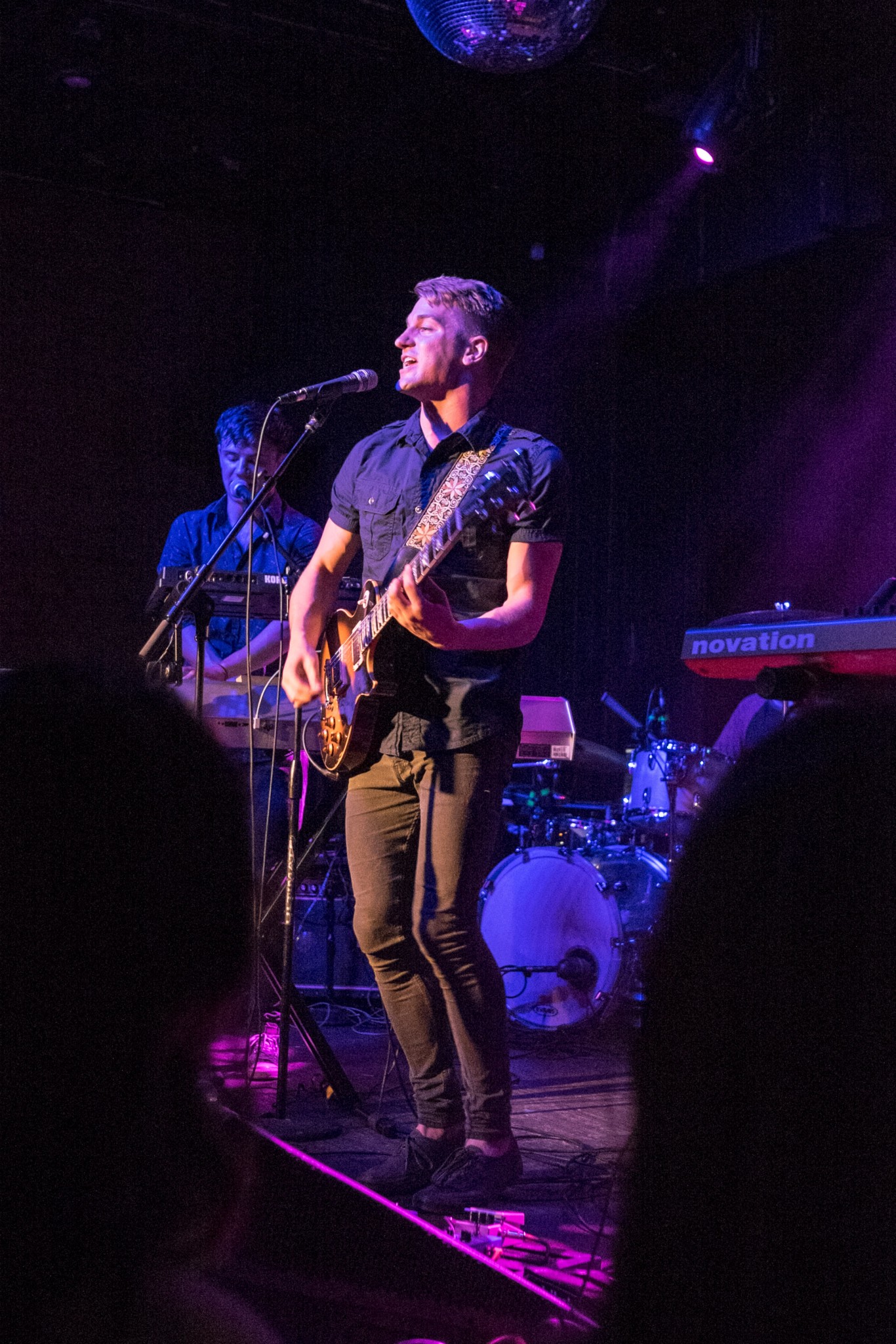 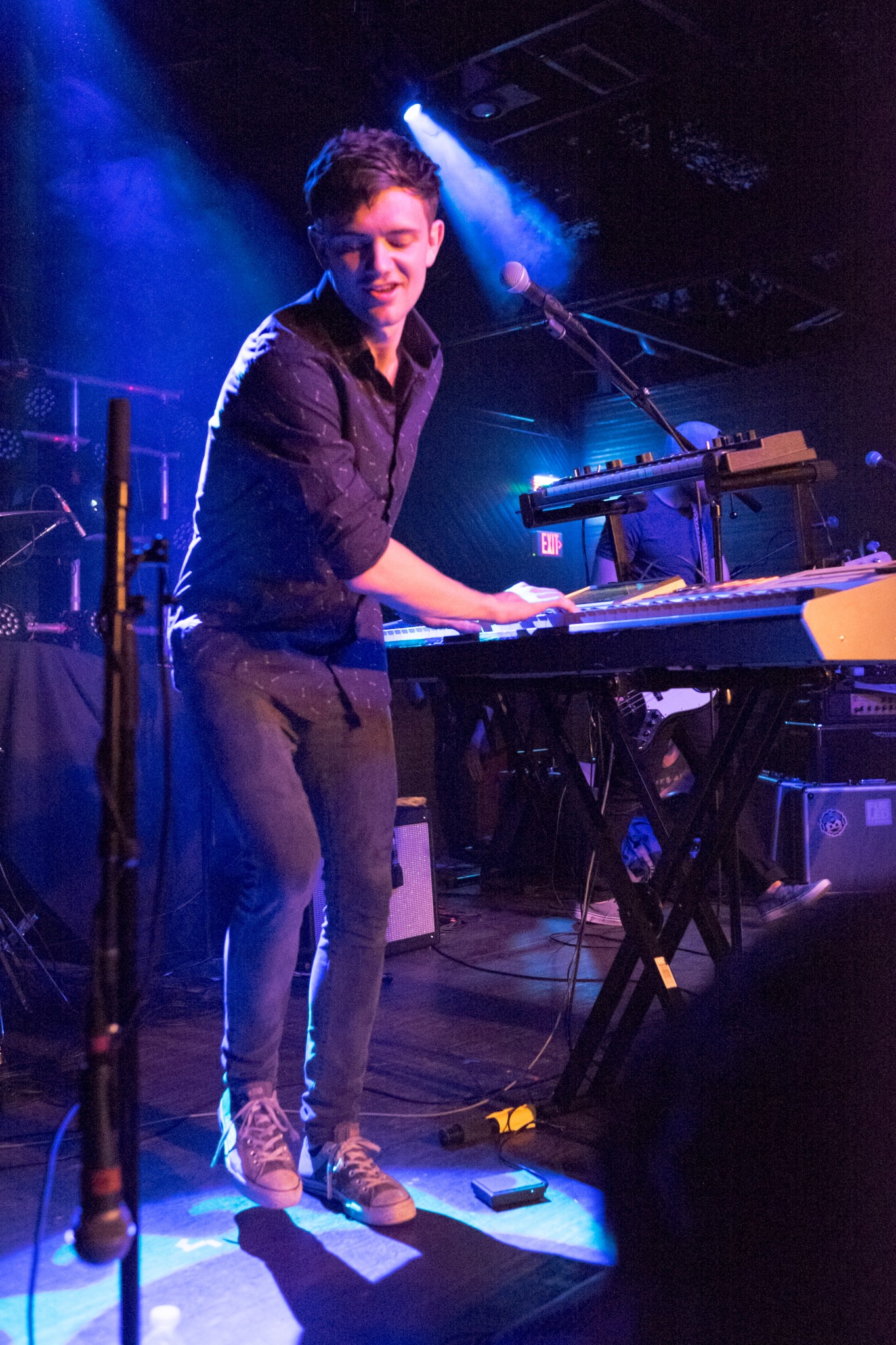 As a band that hadn’t done much true touring, opening for twenty one pilot’s Quiet Is Violent tour in 2014 was a big accomplishment. “We couldn’t have asked for a better tour to be part of right off the bat,” says Senner. “They treated us, just, extremely well.” And not just as friends, but as touring professionals. It came with a bit of a learning curve, but they were helped by twenty one pilots’ band and crew who taught them how to interact with people at venues and on tour, and to always be efficient, on time and courteous. At the end of the day, they’re there to put on a show for the fans.

Wrapping up the interview, I look forward to the show that night. An hour later Vinyl Theatre takes the stage with smiles and an energy they like to call their own. While touring will give them the experience they need to fine-tune their performance and channel their energy to reach the crowd, I look forward to hearing how their sound will be presented in new music. For now, Vinyl Theatre has an upcoming tour with Smallpools and a few radio shows on the calendar. The guys say they have a lot of new material to narrow down and look forward to a headlining tour in the future.