Matt and Kim Party With Austin

Matt and Kim played at Stubb’s in Austin, TX on April 23 with support from WATERS. Their current U.S. tour is in support of their album New Glow, which released earlier this month. All photos from the show can be seen here.

The first time I saw Matt and Kim was at Stubb’s in 2012. I remember them bringing the party to the big stage, and I must say three years later, they’ve still got it.

The 2,000 capacity sold out show packed in people of all ages from young teenagers to moms and dads. The concert goers at the front of the crowd had been waiting for hours in 80 degree weather and humidity so high it felt like you stepped into a sauna. WATERS opened the show and brought the fun. It was hot. It was sweaty. And it was a dance party. The stage was adorned with flowers on each mic stand and in vases spread across amps. Keyboardist Sara DaMert also brought out a bouquet of flowers and handed it out to crowd members before starting the show. They rocked their set with a San Fransisco sound reminiscent of Grouplove’s good vibes. Frontman Van Pierszalowski even commented that he hardly saw anyone distracted by their cell phones. Instead the crowd’s full attention was captivated by WATERS. 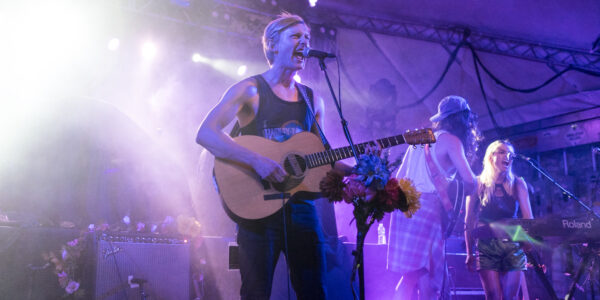 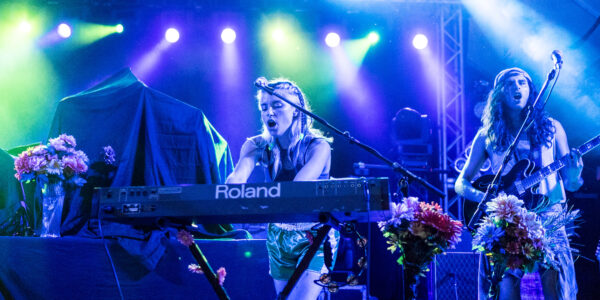 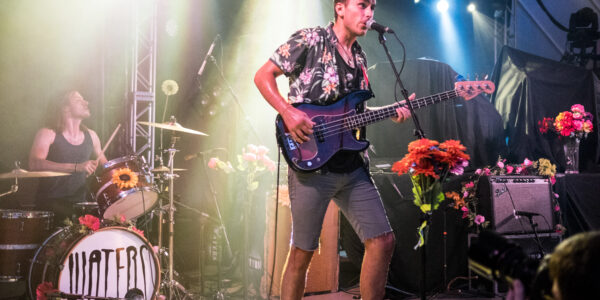 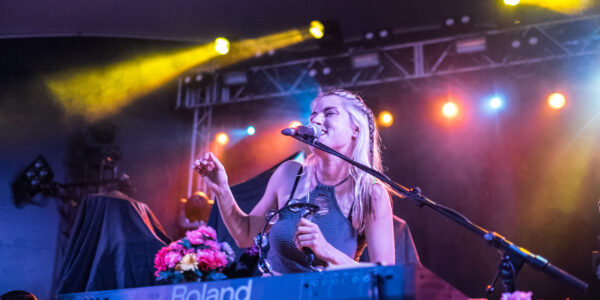 Austin was a special show. You could feel the energy the crowd had before Matt and Kim even started. Audience members were singing and chanting as the anticipation rose. One of the security guards even commented, “this is going to be a fun crowd.”

Finally an ecstatic Matt and Kim took the stage to a wild, roaring crowd. Kim Schifino ran around the stage, waving and smiling at different parts of the audience, while Matt Johnson waved a Matt and Kim t-shirt above his head before throwing it into the audience. Ascending an elevated stage that seated them high above the crowd, Matt and Kim mounted their keyboard and drums to start the first song with a bang. From that moment until the end of the hour and a half set, there wasn’t a sweaty body in the crowd that wasn’t dancing. 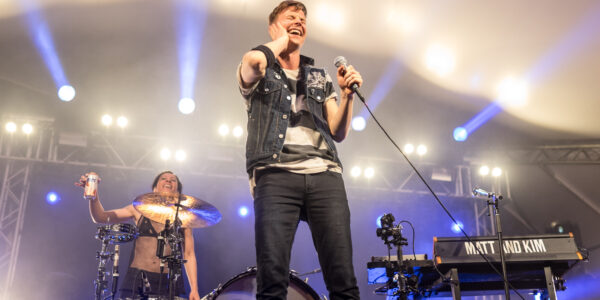 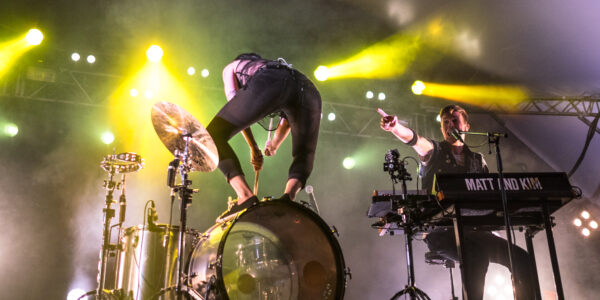 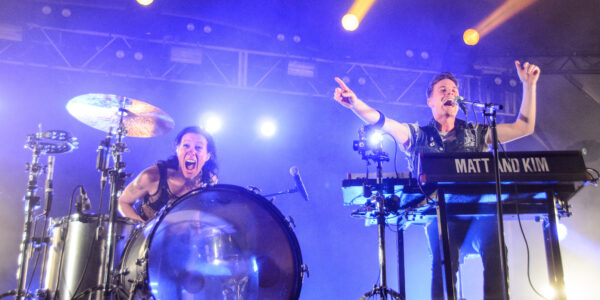 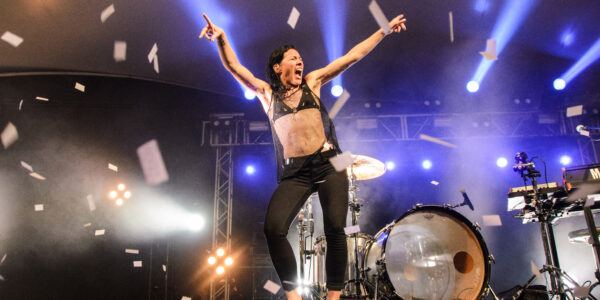 Matt sang in his quirky voice and played the keys while Kim banged on the drums, never stopping from smiling and yelling with the crowd. Already after the first song, the duo stopped to talk to the crowd before entering a dance break. Matt, laughing to himself, asked the sound engineer to turn down his in ear monitor and explained that the crowd that they have monitors so they can hear the crowd, but Austin was already so loud on the very first song that they didn’t need the extra amplification. Matt played a recorded dance track before shooting confetti at the crowd, all while Kim danced.

The rest of the night continued in more high energy antics set to new songs with a couple oldies here and there. Multiple times both Matt and Kim stopped between songs to talk to the crowd, repeatedly saying how insane the crowd was. Austin has always been a favorite city of theirs, and they expressed how thankful they are to be able to play sold out shows on all of their Texas dates. Matt said to come back to a city like Austin and have a crowd like that is an amazing feat for any band, and they are grateful for it. 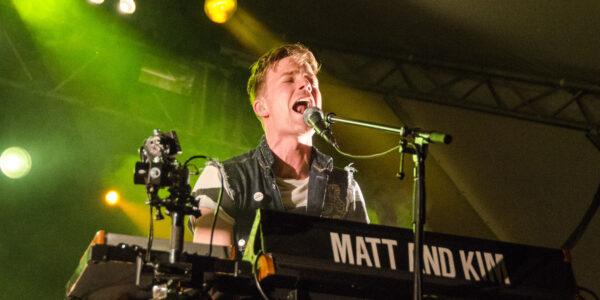 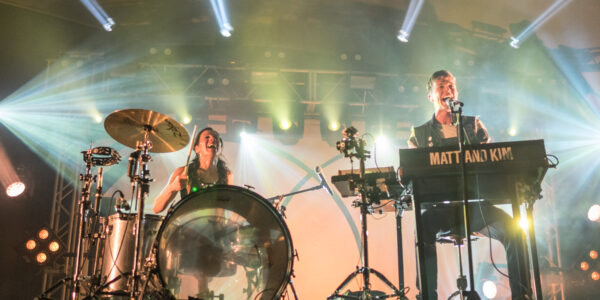 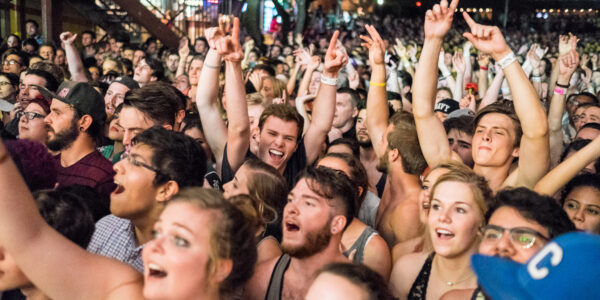 One of the loudest crowds I have ever witnessed, it was no lie that Austin really was a special show for them. The pure energy exuded from the band and the crowd was larger than anything I’ve felt at a show in a long time. When the two left the stage, the night was far from being over. With the crowd chanting “Matt and Kim,” they returned for an encore that was almost more epic than the rest of the set. Matt explained that the two agreed on this tour not to do what they were about to do, but if it felt right they would. Going in, they both knew Austin might feel right, and it did. So for the encore Kim climbed on top of the crowd to dance, for a minute of booty shaking and head banging. For the final song, Matt and Kim both took their shirts off, a rarity for Matt, and asked the crowd to do the same. The duo hardly wanted to leave the stage when the show was over, taking time to say good-byes and toss memorabilia into the crowd.

At the end of the night, every sweaty body in the crowd left wanting to continue the party. That show wasn’t just one for the books, it was one to remember for a lifetime.