flor – A New Wave of Music and Art

Flor, stylized flor, is a project that is bigger than any one of its four members. To label each member as only a singer or bassist would undermine them as creative individuals. Flor is Zach Grace, Dylan William, McKinley Kitts and Kyle Hill. When they come together as Flor, they are artists.

A year ago Grace began to play around with a computer program in his free time, creating random synth sounds he says he never thought would work in a band environment. But William found that he could build tracks around it. And it worked. “I find a synth line that I’m really into, that works really well with some weird chords, and then if everything is going perfectly, the melody just kind of, like, floats on top of it all,” says Grace. He comes up with vocal melodies, singing random sounds as placeholders for lyrics. With the combination of the synth phrases and vocal melodies, William pieces together the songs. It’s an idea so crazy that it almost shouldn’t work, but it somehow does. The two channel percussion and guitar sounds, transforming chaos into music. “And we started getting these new batches of songs that were unlike anything we’ve ever done,” says Kitts. “But it was so cool, and it had something special to it.” For once, says Kitts, it felt like they were doing something right. They found their sound – not a sound that fit into any genre, or a sound that anyone was telling them to be. “We feel like we’re part of this wave, this new generation of music,” says Kitts. He calls it an energetic, young, new way of 80s synthesizer-inspired music. Grace says it’s an optimistic outlook on music.

And they’re not alone. The band sites artists like Halsey and Years & Years who are on the same wave with them. While they all draw inspiration from the same place, they interpret it differently. “The sound made sense for everyone, but it’s all independent,” says Kitts. As music started coming out this year they realized they fit right in. “It… feels comfortable and, like, not too derivative of itself. But it still… fits together,” says Kitts.

Last year, after struggling to find that sound with a different project, the four boys from Hood River, Oregon took a leap of faith and moved to Los Angeles, California. Grace thought he’d hate the move, being from such a small town, but he knew it was right for the band. “Everything just kind of worked out,” says Grace. “We found the right people. We connected on a deep level within ourselves and within these… new groups of people.” The change in location brought about new revelations for them. “I think it’s a big part of realizing it’s not necessarily where you are, but who you’re with and we kind of found a family down there,” says Kitts. Musically, he says, it changed everything. William found his niche as a producer, working with Halsey and other artists. Even more than that, Flor probably would not have happened if they hadn’t move to L.A. “[L.A.] was like the mother to our father (Oregon) that gave birth to Flor,” says Kitts. 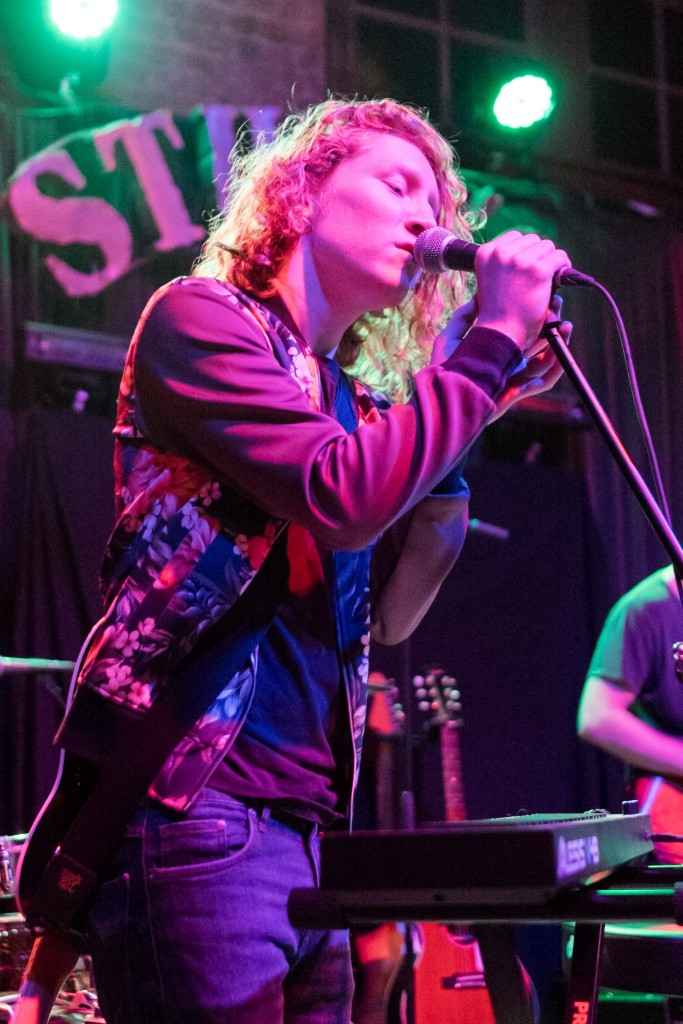 But Flor is not just a band. Expressing their emotion in sonic and visual art, Flor molds the two to become synonymous. “It’s important for us to have a cohesive image that compliments itself musically and visually,” says Grace. Grace’s life is like a color palette, says Kitts. Grace laughs along and explains that he writes the best songs when there is a visual compliment to it, as if he were writing music to narrate a story in his head. It doesn’t always work that easily, but when the art pushes the story, and it’s stimulating, he knows he’s doing it right. “We want things that kind of assault you in a way, but also work with the music,” says Grace. As Grace talks, I can see the wheels spinning in his head, like he is full of ideas that beg to be expressed in the art.

In July 2014, before any of their songs were released, Flor started to post 3D visuals with music snippets on their Instagram account, and continued to do so for several months. The band collaborated with Jade Ehlers, a photographer and designer they met after moving to L.A., to create the visuals that accompanied the music ideas. Fast forward four months to November. Flor released their first song “Heart” on SoundCloud. It was something different. And the first time I heard it, I wasn’t sure what I thought of it. Poignant, hammering synth opens with Grace’s sing-song voice. Each verse is stripped back for a smooth and resonate vocal delivery. The choruses open into a syncopated wall of sound, of instrumentals and synth. With such a complete sound, it is hard to believe the song started off as fragments of synth ideas.

Since February, the band has added three more songs to SoundCloud, completing an EP. And more recently, they’ve had the chance to play a handful of live shows. Producing the sound live has been a challenge since playing the synth lines live would entail more serious equipment and manpower. For now, the band figured out a way to play all of the instruments and vocals live, while the synth track plays with them on a computer program. And it translates well in the live setting. The indie rock influence stands out, something I missed on their recordings, and brings the songs to life. “Every time we play, we are getting more in line with where we want to be,” says Grace. “We have huge dreams with what we can be doing.” It can be frustrating to set the bar so high, says Kitts. Being held back technologically and monetarily forces them to focus on perfecting their live performance. And while opening the show doesn’t warrant a great display of lights, they hope to someday have illuminating visual projections to bring home the art that is synonymous with their songs. “We want it all to be tied in with this one burst of art when we play,” says Kitts. 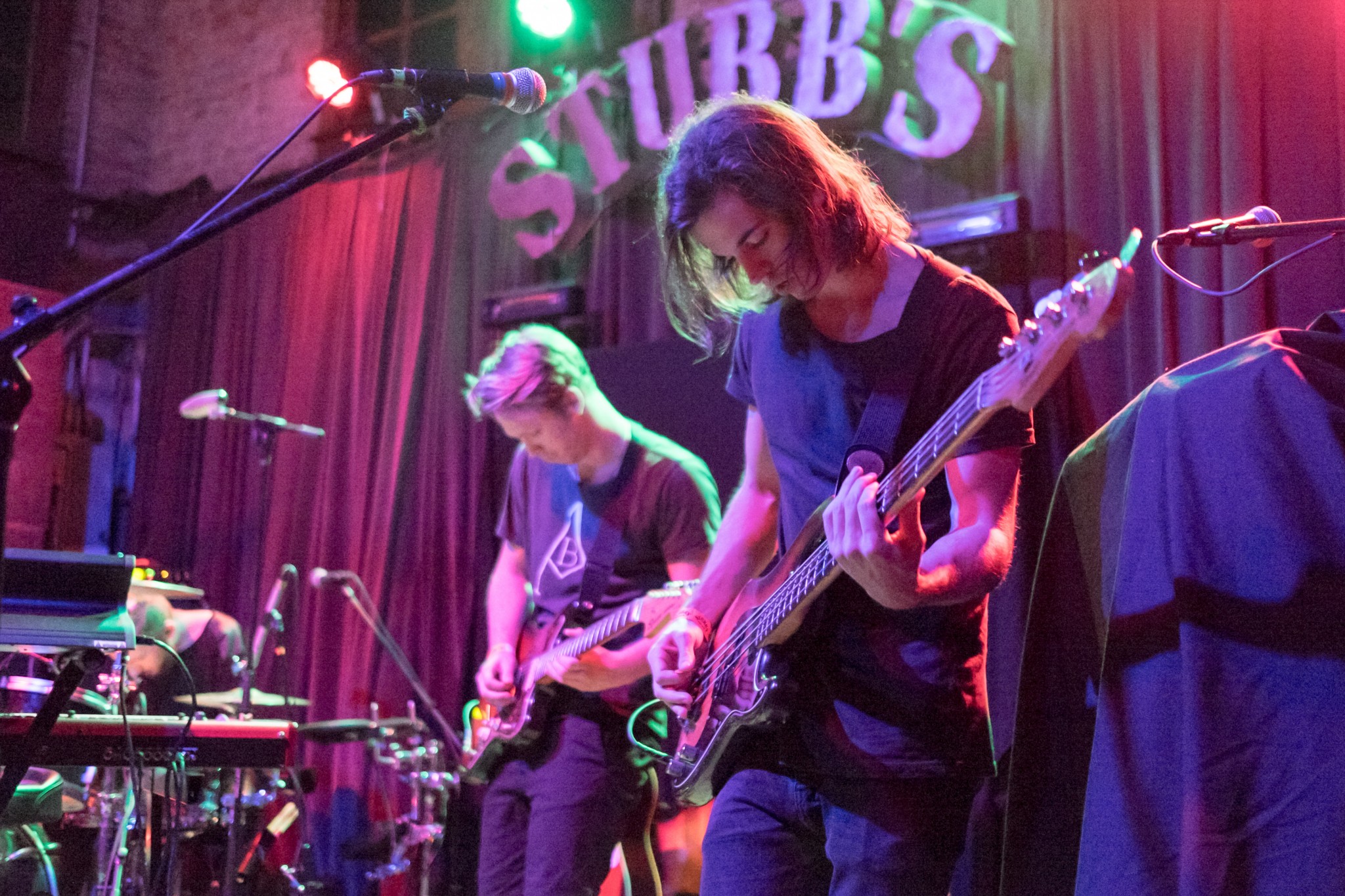 More than that, Flor is searching for their community of like-minded individuals. Grace dreams of a family-like environment where people can connect with the stories and art. “I’d like people to be able to connect with our songs, and feel with our songs,” says Grace. And not just as a fan, but be a part of something bigger. “[It’s] more than just, like, music. [It’s] like a living, breathing organism that we can all… be a part of,” says Kitts. “It sounds a little weird.” Sitting on the dimly lit stone steps of Stubb’s outdoor amphitheater, with live music droning in the background, it does sound a little weird. But listening to Grace and Kitts talk about their dreams is refreshing. The passion in their voices is clear and piercing. It’s apparent that they wholeheartedly believe in every word they say, and it makes you want to believe in them, too. Hearing them talk about their dreams feels a little less weird and a little more real. I can tell Grace views his goal as far off in the future, but finding a close-knit network may happen sooner than he thinks. They’ve already found it in L.A. – the group of friends, family even, supporting each other’s creative endeavors. They come to the shows and each time there are a few more people, says Kitts. It’s growing organically.

Online they hope to reach people through social media. The numbers of plays on SoundCloud show that there is someone out there who cares, and probably more than just someone. “That means people somewhere are connecting to the music,” says Kitts. “And that’s kind of all we can ask for.” With Flor being about more than the music, they have to maintain a certain image on social media. “I guess it’s important to guard that aesthetic, cause we don’t want it to lose that magic,” says Kitts. “Cause that’s what music is– it’s magic. And people that get the music and really relate to it– I think magical is really the only word to… describe that feeling when you connect with music and connect with other people.” Hopefully their magic is strong enough to foster a community where people can go and not be distracted by the ephemeral things. “When you go to Flor world, you’re there,” says Grace.