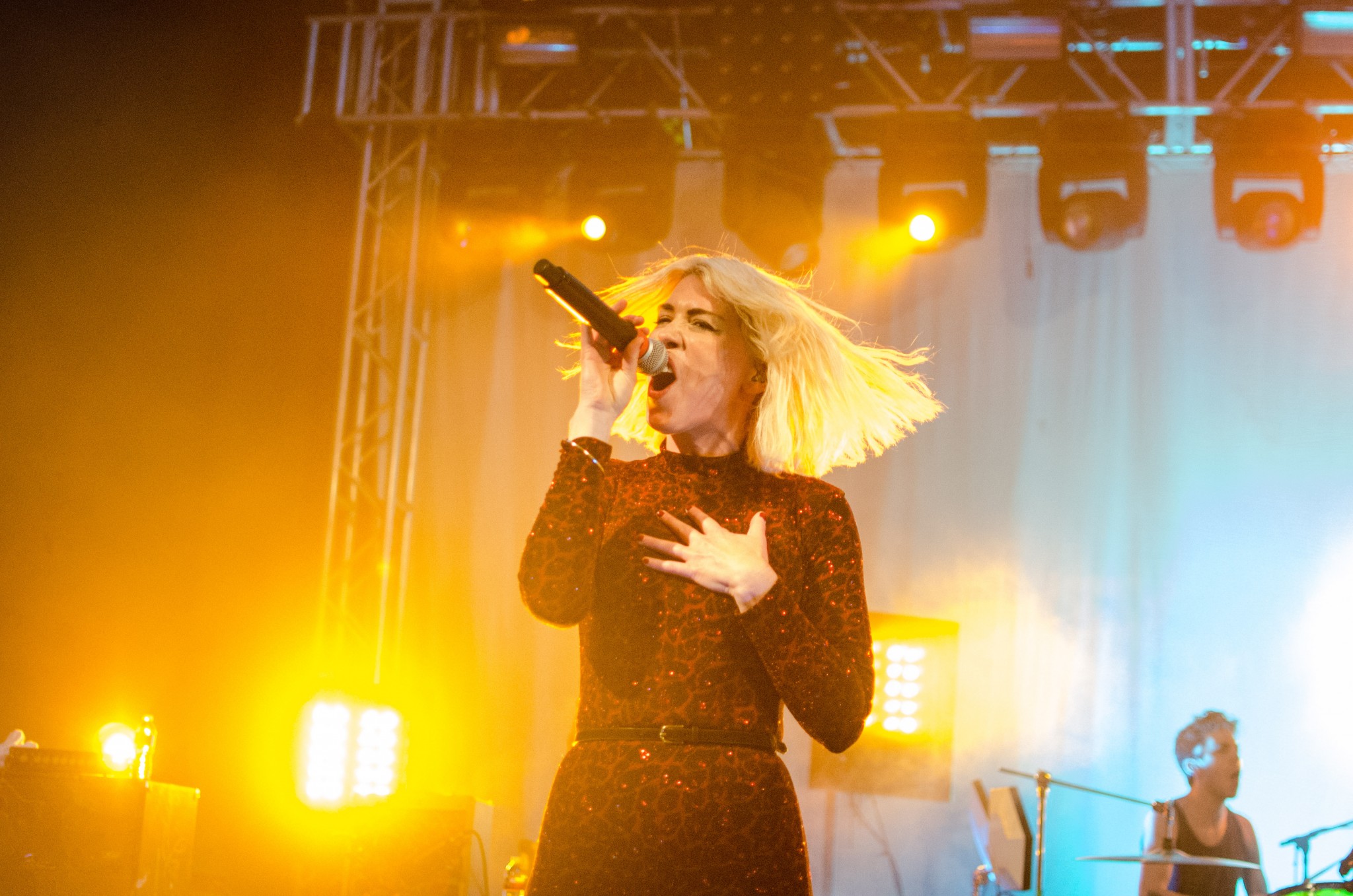 Grouplove is the Whole Package – Tour Photos and Review

I was thrilled to hear Grouplove would be touring with MSMR and Smallpools as supports for their US tour, so I saw them at Stubb’s in Austin, TX on April 6. This lineup is one of my favorites because the vibes of these bands fit well together. Smallpools is a newcomer who could satisfy the likes of Grouplove fans, while MSMR has a special spunk brought to stage by front woman Lizzy Plapinger. All of the photos from the concert can be seen on my flickr page.

The reason I love concerts is because you have the chance to physically see the people who made the music you love – their style, their energy, their passion and stage presence. For me, Grouplove really hits the head on the nail. They are the complete package of hippie spirits, style and sounds. 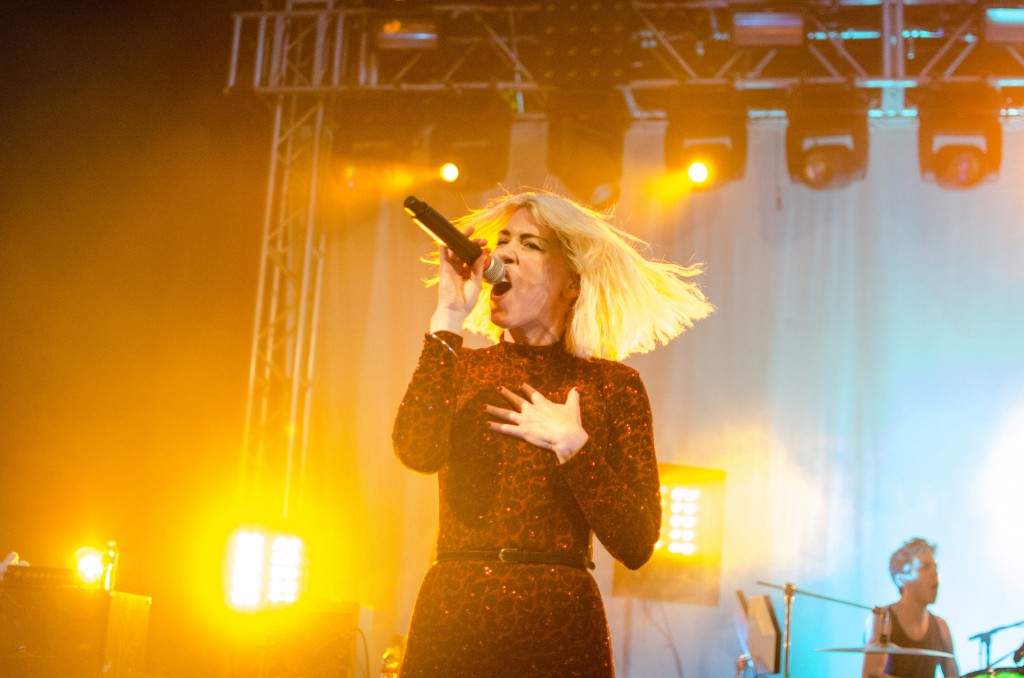 MSMR has quickly become another of my favorite bands after seeing them first at Austin City Limits. Lizzy’s smile and quirky personality is captivating. Her ever changing hair color and omnipresent fashion sense is also part of that package that makes the live band what it is. The MR to her MS, Max Hershenow, matches her style and has an equally strong stage presence with his dance moves. 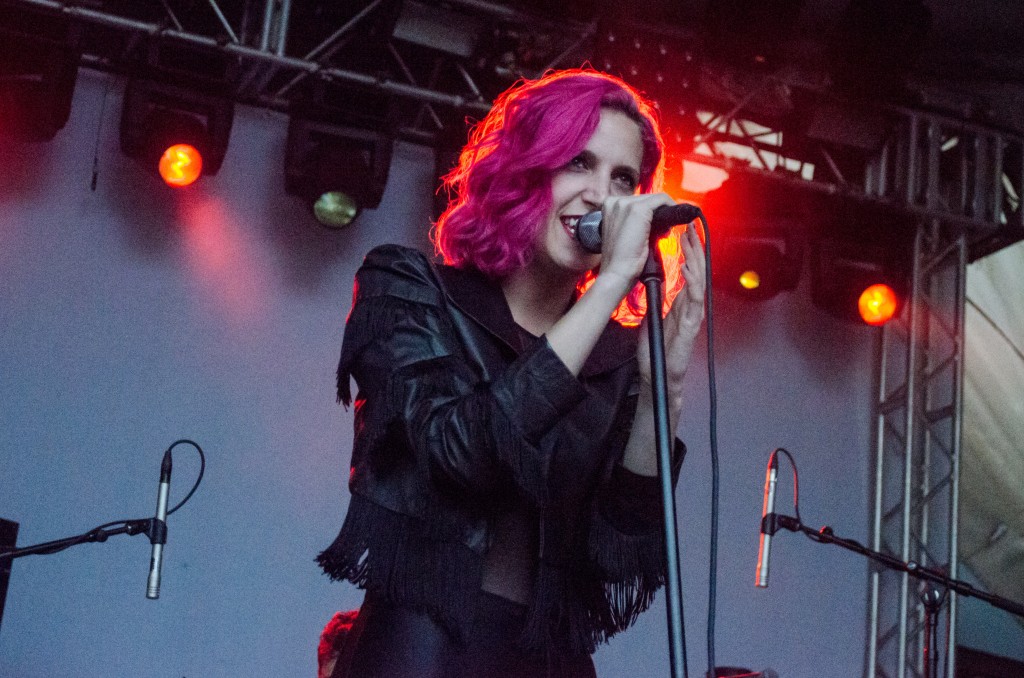 Smallpools has been one of the bands on my watch list since May 2013 when they released their first single on SoundCloud. I even reviewed their debut EP, which you can read here. Sometimes new bands’ live performance is not as strong as their sounds, but this was not the case when Smallpools took the stage. They played the songs from the EP as well as a few new ones that got me even more excited to hear it. The crowd enjoyed the set and even sang along to some songs.

This year for SXSW I headed out to the mtvU Woodie Awards and Festival. It was one of the highlights of my week. MTV brought together some of the newest and hottest artists for an all day festival and awards show, filmed to be aired later on the channel. Read about some of the performances below and look at even more photos here.

The all day anticipation was matched by the mastermind himself when Childish Gambino made his way from back stage, through the venue, all the way into the crowd and onto the stage, all the while rapping with marching band posse dressed in lights. Donald Glover delivered a satisfying set, throwing down on every song as the fans went wild, singing every word back to him, no matter how fast the rapping was. 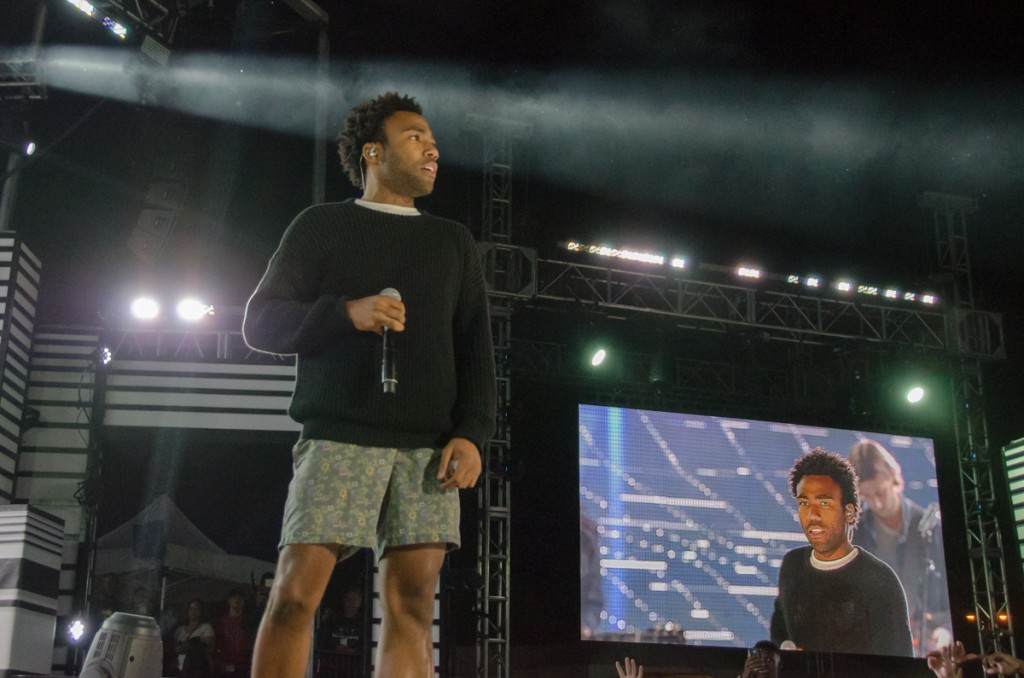 Iggy Azalea owned the stage with style, sass and vocals, not to mention the dance moves. The crowd was so insane that I though the barrier might break because security actually had to hold it back at times. The hype was only validated when Charli XCX joined Iggy to perform their new single “Fancy,” which was accompanied by blow-up balls and confetti for a climactic energy high. 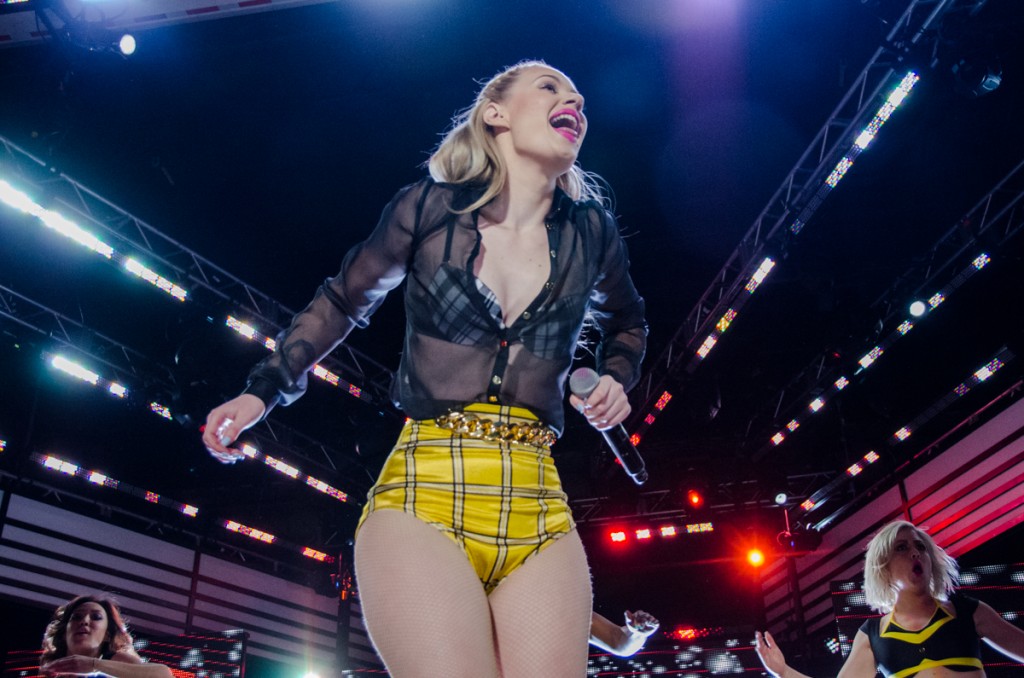 The 1975 made a debut performance in America last year at SXSW. Since then they have exploded into the limelight of the music scene, so it only makes sense they would return to SX for the second time around. After sound checking, they were waiting on stage for their turn to perform, Matty even taking a break to smoke a cigarette. Much to their surprise and excitement, as well as the crowd’s, Lil Wayne made an appearance on the main stage to commence the show as well as introduce the band. As the first performance of the awards portion of the event, they rocked the stage out right, playing a sweet five song set.

END_OF_DOCUMENT_TOKEN_TO_BE_REPLACED

I had been listening to Kodaline for awhile before I saw them for the first time as a last minute addition to the ACL weekend one lineup. The set was first thing Sunday morning so there weren’t a ton of people there but of the ones who were there, it felt like everyone was charmed by their Irish accents and soothing rhythmic songs. 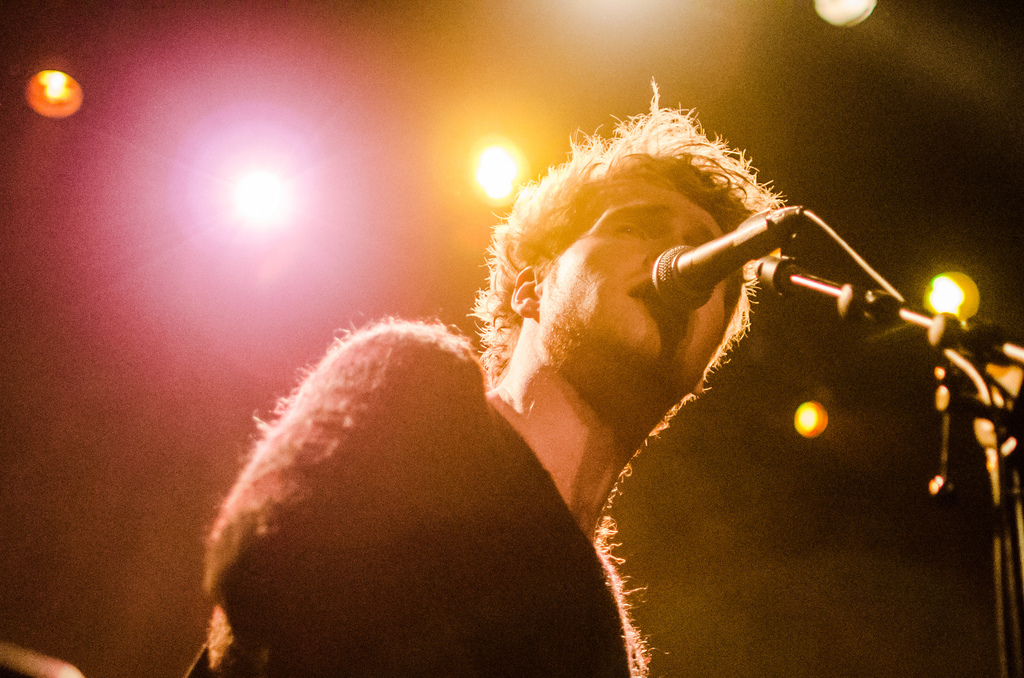 I had the same experience when I saw them on Feb. 20 at Emo’s in Austin. Although this time, everyone knew all the songs and was singing every word back. That’s one thing I really love about concerts- being able to see a band grow from unknown to having a crowd of dedicated fans. See all photos here. 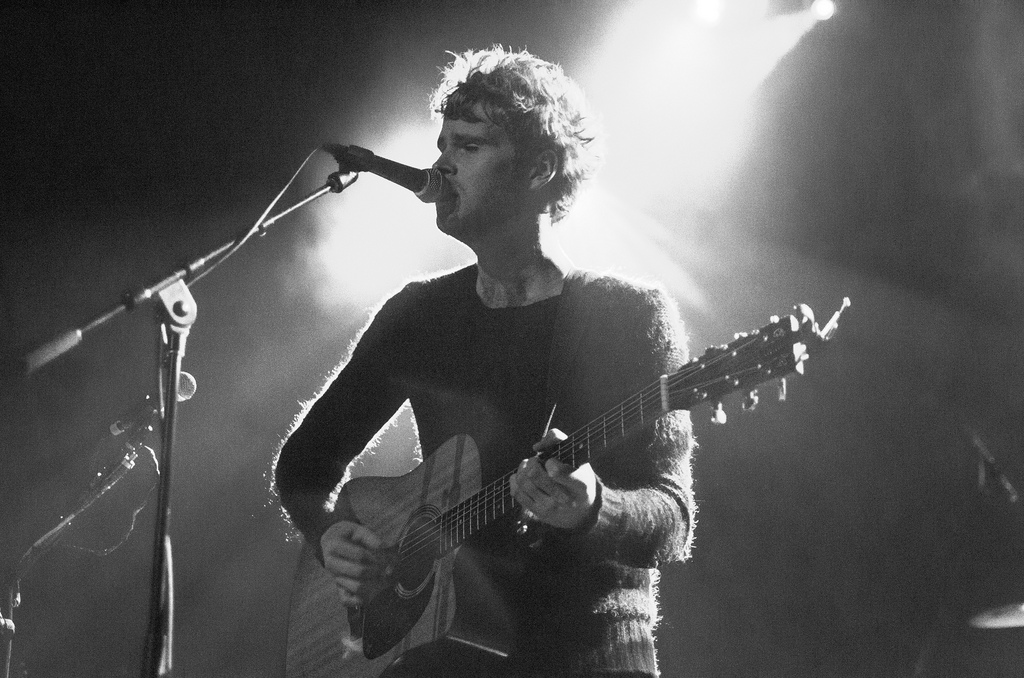 Photos: Panic! at the Disco

Panic! at the Disco made a stop in Austin, TX at Emo’s on Feb. 12 for their Too Weird Tour. The band released a full length album Too Weird To Live, Too Rare To Die on October 4, 2013. 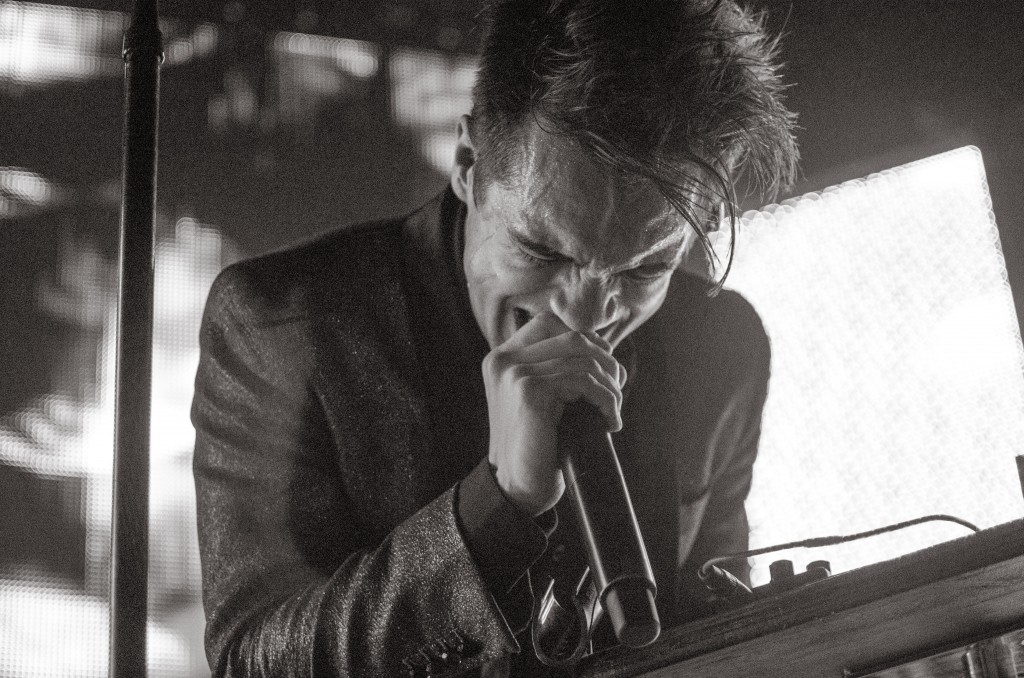 The show was a high energy, adrenaline-pumped two hour set filled with smoke and lights galore. So much smoke, in fact, that the fire alarm went off and the police showed up.

Brendon Urie’s voice was even more impressive, hitting the highest of notes and even screaming at points during the set. There is no question that Urie is a true performer and talented musician.

As you may or may not have read, I went to the Atlas Genius concert at Stubb’s on Oct. 23 to take photos, so here they are!

Atlas Genius is actually quite a talented band. Their live sound was almost better than the record, which is a rare occurrence in live music. Everything about the experience was chill but at the same time energetic. There was no pressure to perform or hype up the crowd. It was what it was. It was natural and free-flowing. They also had a very cool lights shows with oranges and reds to blues and greens. Atlas Genius is definitely worth seeing if you get the chance. 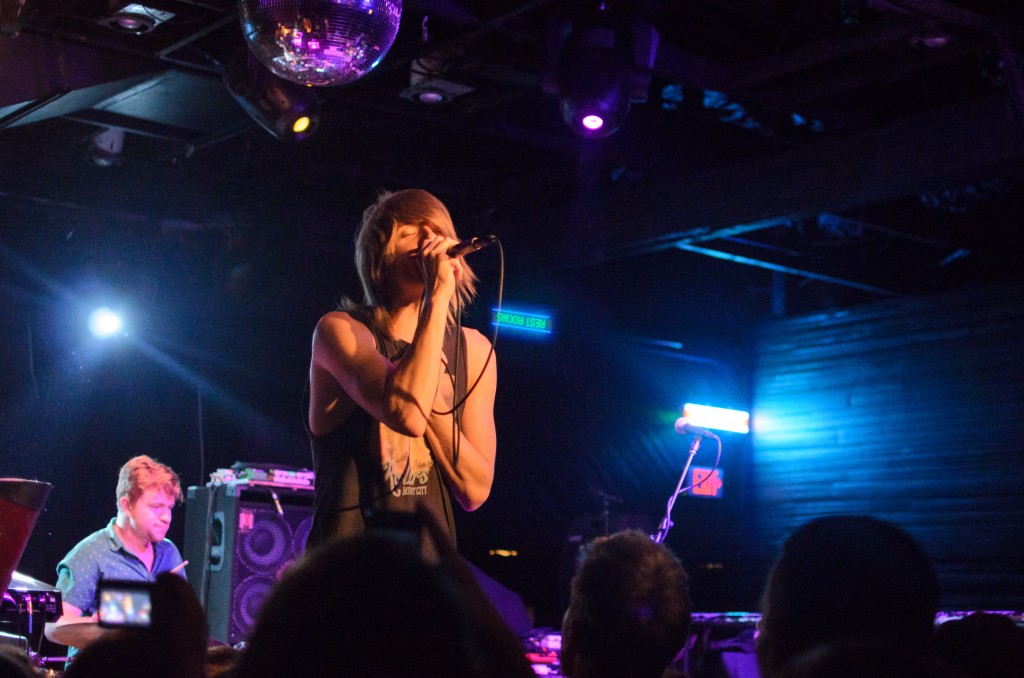 Hey guys! Photos of The Maine and This Century are now posted on my flickr page with photos of Brighten and A Rocket to the Moon on their way, so check back for those soon. Below is a video of The Maine playing “We’ll All Be” live in Austin with the other 8123 tour bands. Keep your eyes peeled for more videos of your favorite songs.

I love The Maine because they are an ever-progressing and evolving band. They took their music places I never thought they would be able to. And every time I go to their shows they are increasingly better performers and musicians. The Maine really is growing into a rock and roll band.

Of Monsters and Men Photos

Icelandic indie-folk/pop band Of Monsters and Men made a stop in Austin for their U.S. tour, so I went down to Stubb’s to see them and take photos. I really only knew the band for their hit “Little Talks,” but I was quite surprised by their live performance. They were all smiles the whole time and so was the crowd- their music is contagiously happy. I can see why their show sold out so soon.

Their live sound is just as full as the album because, in addition to the normal band instruments, they play piano, organ, accordion, trumpet, and assorted percussion instruments in their live show that are also used on the album . But what really makes them unique are their lead singers- yes, plural. They have a male and female singer who take turns leading the songs and singing together, which gives their music a rich and interesting sound. The six piece band also had two touring members with them. They’re a really cool group of musicians and I suggest seeing them live.

To view all of my photos of the band, you can visit my flickr page.

I said I was bringing SXSW to all of you, so here it is- video footage of all your favorite artists like Tegan and Sara, Macklemore and Ryan Lewis, Crown the Empire, Twenty One Pilots, Rick Springfield, and Andrew McMahon. You can also visit my flickr page to see all of the crazy events happening on 6th Street and around town (including a violin-playing werewolf and chalk drawings of Grumpy Cat).

From the music to the film to the people,  South By Southwest is a unique happening that shows the spirit of Austin, TX.  I know I speak for many people when I say I wish every week could be SX. Attending this one of a kind event should be on everyone’s bucket list.

South By Southwest is full of shows and free showcases, so many that it’s hard to keep track of them all. More often than not you’ll hear about showcases from word of mouth, which is how I found out about Andrew McMahon playing a free show on Friday at Whole Foods.  The event was hosted by Quantum Collective and Amazon who had many bands scheduled to play that day, even the famous Rick Springfield who I saw before Andrew McMahon.

There were lots people lounging around on the rooftop of Whole Foods with friends, kids and dogs in tow, all enjoying the live music, free food, and the atmosphere. When Andrew McMahon and his band started setting up people gathered under the pergola to watch him.

Since the end of Jack’s Mannequin and the start of Andrew McMahon touring under his own name, he added several band mates to his live band so that he could have a fuller, more complete live sound. Andrew and his five bands mates packed keyboards, synthesizers, basses, guitars, mics, and all the pedals and wires that go along with it onto a stage that would be considered small even for four people. He began his set about 40 minutes later after all the instruments were sound checked and they got his piano working.

After playing “Television” (Jack’s Mannequin), “Learn to Dance” (new), and “I Woke Up In a Car” (Something Corporate), he started to play his newest song “Synesthesia” but had to cut it because one of the synthesizers stopped working. The thing about SXSW is that everything is spontaneous and problems happen and you just have to keep going. So Andrew finished his set with one of his personal favorite Jack’s songs “Bruised.”

After seeing him at SXSW and again for his show in Dallas I realize how much of a true musician and performer he is. He is so true and real in his music and so genuine when he performs. Andrew McMahon  is something special.

You can read about my one of a kind experience at his show in Dallas and see even more photos by clicking here.

For more photos of Andrew McMahon from SXSW, you can visit my Flickr page.

All of my photos from the show can be viewed on my flickr page.

Hey guys! I scored a photo pass for FUN.’s show in Austin at Stubb’s on Feb. 12. Read my notes from the concert below and check out my photos.

After receiving two Grammys only two days prior to the show, it was easy to see that Fun. was still beaming from the recognition.

Fun. was very grateful to finally play at Stubb’s outdoor amphitheater (2,000 capacity). It’s a venue that a lot of bands hope to play at some day when they’re finally big enough. Nate Ruess told the crowd how they always dreamed of playing at Stubb’s. The band has played at Stubb’s Jr. (300 capacity) for years and eaten Stubb’s world famous BBQ whenever they came to town. So finally getting to play at Stubb’s outdoor amphitheater is when you know you’ve made it, and Fun. really has made it.

It was a very special show for the band and everyone there.

Check back here soon for live footage from the show.