Across the Pond: Buzzworthy Bands 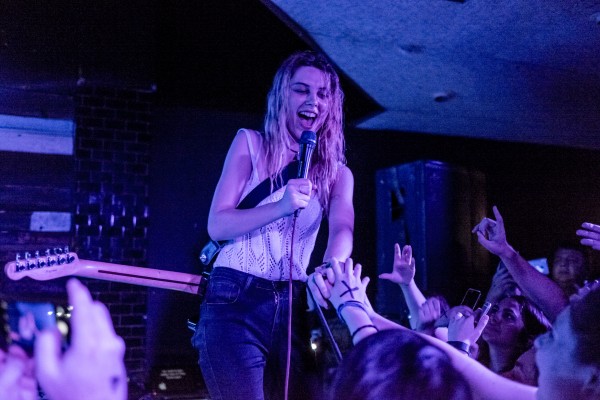 Wolf Alice at Holy Mountain in Austin, Texas, on May 19. Ellie Roswell sings to fans during encore. Photo by Jenna Million.

I am starting a new series called Across the Pond, which will examine the music scene of England and the surrounding region. The first three posts in this series are part of a project for my public relations class. As this is a topic that interests me, I may continue the series beyond these three posts.

In the past six months I have become increasingly interested in English artists and what the music scene is like for new artists and new music. I will be posting songs, playlists, artists features and interviews, and other content. To get things started I want to introduce you to several of the undiscovered or upcoming English artists that have my attention right now.

If you’ve been following me, you know that Wolf Alice is one of my favorite bands right now. The four-piece London-based group is fronted by singer and guitarist Ellie Roswell. Wolf Alice’s sound comprises rock, folk and grunge elements to create songs with a roller coast of emotions from soft whispers and solo guitar to screaming and heavy bass. They released their debut album My Love is Cool on June 22, and have had huge success in England since. My Love is Cool is nominated for the Mercury Prize for Album of the Year along with 11 other U.K. and Irish acts.

“Vivienne” is the latest single from Reading quartet Sundara Karma.  What drew me to Sundara Karma was their rhythmic drums and bass that drives most of their songs with accents of guitar hooks. Singer Oscar Pollock’s vocals bring a new perspective to dreamy lyrics about teenage daydreams and late nights. With every song Sundara Karma has released I’ve been impressed by the writing and production quality of the barely 20-year-old musicians. In the past few months the band has been gaining more traction, opening for The Wombats and Circa Waves on tour and starting their first headlining tour across the U.K. Signed to Chess Club Records, Sundara Karma are set to release their second EP soon, and have an album in the works.

Lapsley has had a slow but steady buzz around her for awhile. The 19-year-old from Liverpool has a sonorous voice that evokes emotions deep within the listener. I reviewed her single “Hurt Me” here. With the direction she’s headed, Lapsley could be a big name in pop in a few years.

Rat Boy is a little bit of rock, a little bit of rap, a little bit of grunge and a lot of crazy. Hailing from Essex, Rat Boy has a distinct accent, and at times sounds like a teenager rapping over early Arctic Monkey garage rock songs. Rat Boy feels very much representative of teen angst, singing about everyday life in a matter-of-fact manner, and calling himself “scum” in his Twitter bio. This list might as well be a list of England’s young talent because Rat Boy also slides in at barely 19-years-old. He was featured in NME’s list of 50 New Bands of 2015, and will be opening the The 1975 on their U.K. later this year.

The Japanese House is the project of 19-year-old Amber Bain, who remained anonymous for six months after releasing the first single “Still” which premier on BBC’s Radio 1 with Zane Lowe proclaiming it his “Hottest Record.” The music is an extreme experimental take on pop with ethereal vocals that surround the listener and layers of synth overtones that drown out the outside world. The Japanese House is produced by The 1975’s singer Matty Healy and drummer George Daniel. The 1975, whose music also brings an experimental edge to traditional pop music, has a clear influence on the production of the music, at times leaving fans to wonder if it was a side project of Healy’s. The Japanese House is undoubtedly unlike any other projects right now, so much so the music is almost alien sounding.