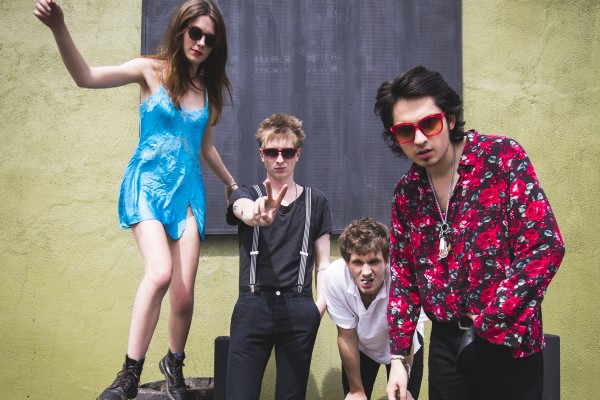 The United Kingdom has a plethora of rock bands popping up all around, and many of them have already received popular status across the pond. Soon, there will be a British invasion in America. From South by Southwest (SXSW) last March to festivals like Lollapalooza and Austin City Limits, the British artists are making their mark this year. Here are some of those artists you need to know.

One of the artists I’m the most excited for is Wolf Alice. Debut album My Love Is Cool is set to release on June 23. For now, you can listen to “Bros,” which premiered on NPR’s Songs We Love. If My Love Is Cool is anything like Creature Songs EP, it will be a combination of heavy-guitar rock-beat songs reminiscent of Nirvana, but with the sweet, soft and resonating vocals of singer Ellie Rowsell. Wolf Alice is everything I didn’t know I was missing. Their name covered SXSW. While I was unable to catch one of their shows, the band is currently touring America and will be in Austin, TX on May 22. If you can’t make it to the show, don’t worry – they’ll be back for weekend two of Austin City Limits on October 9-11. They have a massive sound that I look forward to see translated into the live setting, particularly at festivals.

2. Catfish and the Bottlemen (Wales)

Another artist that made a stop at SXSW, Catfish and the Bottlemen are selling out entire UK tours, playing each night to venues of several thousand people. As of last month, the September 2014 release of debut album The Balcony is certified gold in the UK. While receiving such success in the UK, the US has yet to catch on to the sensation. Once it does, it will be contagious, becoming a name to be known alongside Arctic Monkeys. The young rockers display an affinity for music through their song composition and impressive guitar tone. While they already have a steady fan base growing in the US, I think it will take another release or two to propel them into full-on popularity in America.

Royal Blood’s self-titled debut album hit the scene in August 2014 and immediately received recognition, reaching number one on the UK charts. They won the title of Best British Group at the 2015 Brit Awards, nominated alongside Alt-J, Clean Bandit, Coldplay and One Direction. Royal Blood is a duo composed of singer and bassist Mike Kerr and drummer Ben Thatcher, but the sound created with the two of them is enough for a full band. Their music draws heavily on blues rock, heavy metal and grunge of the 80s and earlier decades. It is refreshing to see a band with a strong rock sound delivering the music in a new light. They aren’t just repeating rock history, but making it. Luckily for you Austinites, they are playing both weekends of ACL Festival.

Taking it back from the hard rock, Circa Waves displays a sound more akin with 90s Britpop, and fits in somewhere among The Kooks and The Wombats. Circa Waves is another young band. And yet, they’ve played with artists like The 1975, Royal Blood, Interpol and Temples. Having released T-Shirt Weather EP in Feb. in the US with Virgin Records, Circa Waves also graced SXSW with their nostalgic pop rock sounds. The band recently announced a UK headlining tour, making a stop at London’s 5,000-capacity O2 Academy Brixton. “T-Shirt Weather” is currently played on SiriusXM’s Alt Nation, and with a sound like this, the band is sure to follow in the footsteps of many Alt Nation artists before them, like The Neighbourhood and Bastille, reaching festival-sized fame.

The disparity between UK success and US success is felt firsthand by The Vaccines. Too famous to show their faces on the streets of London, the band, dressed in all black, stands in line at SXSW to get into a showcase. No one stops them for a picture or bothers them for a chat. The only one to recognize them is a friend (and huge fan) I’m walking with. While SX lends it self to blending the masses of bands into the crowd, even a band of The Vaccines’ size in the UK would be gawked in the streets of SX. Releasing their first song in 2010, “If You Wanna” was an instant hit, being named Zane Lowe’s “Hottest Record in the World” days after the band uploaded the demo to YouTube. The Vaccines are set to release their third full length album English Graffiti on May 26. From the sounds of the first three singles, it lands them somewhere between Arctic Monkeys’ heavy guitar riffs and The Kooks’ carefree jangle pop.