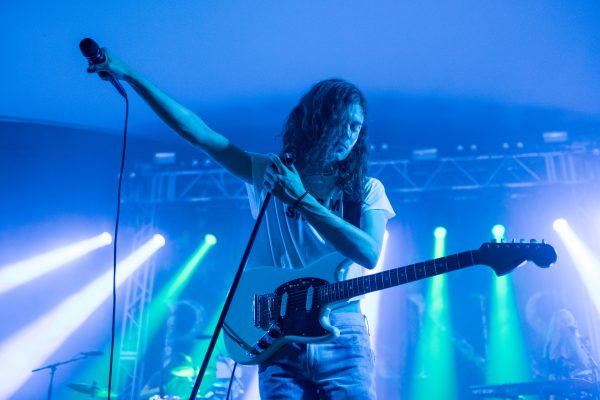 BØRNS performing at Stubb’s on June 7. All photos by Jenna Million.

On one of the first warm nights of summer last Tuesday, people filed in one after another at Stubb’s outdoor amphitheater to be serenaded and hopefully catch a glimpse of BØRNS, an up-and-coming artist who’s honey vocals and cotton candy music land him on the edge of pop. The sold-out show was moved to Stubb’s after selling out Scoot Inn, a big accomplishment for any artist who played Stubb’s 450-capacity indoor room less than a year ago as one of Austin City Limits Festival’s after shows.

The cool-headed 24-year-old graced the stage with ease that comes from months spent on the road performing nightly. BØRNS floated back and forth across the stage through out the set, eliciting cheers and screams from the many teen boys and girls in the front of the crowd. The idealistic pop music and mostly falsetto vocals create a dream-like sound-scape. Oversaturated lights bathed the singer in blues, greens and reds. The added visual stimulation transformed the musical experience into an stellar wonderland, where BØRNS is an ethereal pop sensation.

As BØRNS made his way through Dopamine, his 2015 debut album, many audience members sang every word in a passionate cry, challenging the volume of the singer himself. As he belted out a David Bowie cover of “Heroes” to end the night, it was obvious he wooed Austin.