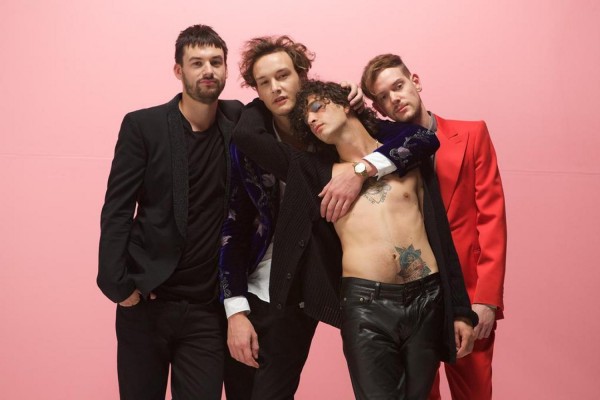 Long gone are the days of The 1975’s black and white aesthetic and subversive pop songs. Teenage girls are ditching their black and white 90s grunge wardrobes for something new – pink, blue and 70s pop all over.

The 1975 announced the coming of a new era on June 1, posting a old-style typewritten note online before deleting all social media accounts. (The band is notably named after a date that was hand written in a book given to Healy: 1st June, The 1975.) While the disappearance only lasted 24 hours, the band received enough publicity of the stunt to put them on the radar of larger audiences. Fans have anxiously awaited new music since the band’s 2013 debut album was released. For the second album, it was a certainty that The 1975 was going to reinvent itself, musically and aesthetically.

Four months later, The 1975 was ready to show its new self to the world. Single “Love Me” debuted as Annie Mac’s Hottest Record in the World on BBC Radio 1 earlier this month, and it’s a time warp back to the 70s.

It appears The 1975 have taken their name at face value. It would be an understatement to say the band has been influenced by 70s and 80s pop music – rather, The 1975 are bringing 1975, quite literally, to 2015. “Love Me” features electric guitar hooks, space-age synth and keys, and vocal emphasis, which Matthew Horton for NME notes is oddly reminiscent to those of David Bowie’s “Fame,” also released in 1975.

That’s not half of it. Prior to the single release, The 1975 posted a photo of the band (pictured above) dressed in a red suit, black velvet jacket, leather pants and most notably, blue eye shadow on singer Matthew Healy. Healy had all but turned into Ziggy Stardust. It was no surprise The 1975 was going retro.

“You reinvent yourselves but you make it feel like the natural evolution,” Healy said in an interview with Mac on Radio 1. “We didn’t necessarily get in a room and start putting leather trousers on and makeup.”

It’s a hyper-glamorized vision of the band’s previously all black aesthetic. The music, however, takes a bigger leap. The 1975 was always using pop guitars and alien-sounding synth that fall in line with syncopated drums and bass. “Love Me” sky-rockets to a new level.

The music video for “Love Me,” released Oct. 28, appropriately parallels the satire of pop culture and fame heard in the lyrics. At first watch, the band looks a little bit insane, lead by Healy’s mental antics. The video takes a jab at the agencies of fame. In one scene, Healy stands in a group of cardboard cutouts of Harry Styles, Ed Sheeran and Charli XCX, among other famous artists, singing lines such as “I’m just with my friends online” and “you look famous, let’s be friends.”

While Healy said in the interview “Love Me” is about narcissism, the way in which Healy sings about the topic of fame communicates a deeper search for truth about the lives they’ve been living for the past two years under the public eye. Healy said the fans have given the band an opportunity to be truthful in their music because “it’s all about pursuit of the truth.”

The 1975 was slowly becoming a pop band, mainly due to media opinions and pressure to be identified by a genre. The music wasn’t just alternative rock, but it wasn’t quite pop. With “Love Me,” The 1975 embrace pop, but in a way that challenges the music industry to evaluate the quality of pop music it is producing. In the Radio 1 interview, Healy said he is sick that there are not enough good pop bands at a time when there is an “amazing lexicon and vocabulary of sounds” for pop music.

Healy said in the interview the 17 track album, precociously entitled “I Like It When You Sleep, For You Are So Beautiful Yet So Unaware Of It” to be released February 2016, is an eclectic “magpie” of pop culture – as with the first album, every song has a unique sound.